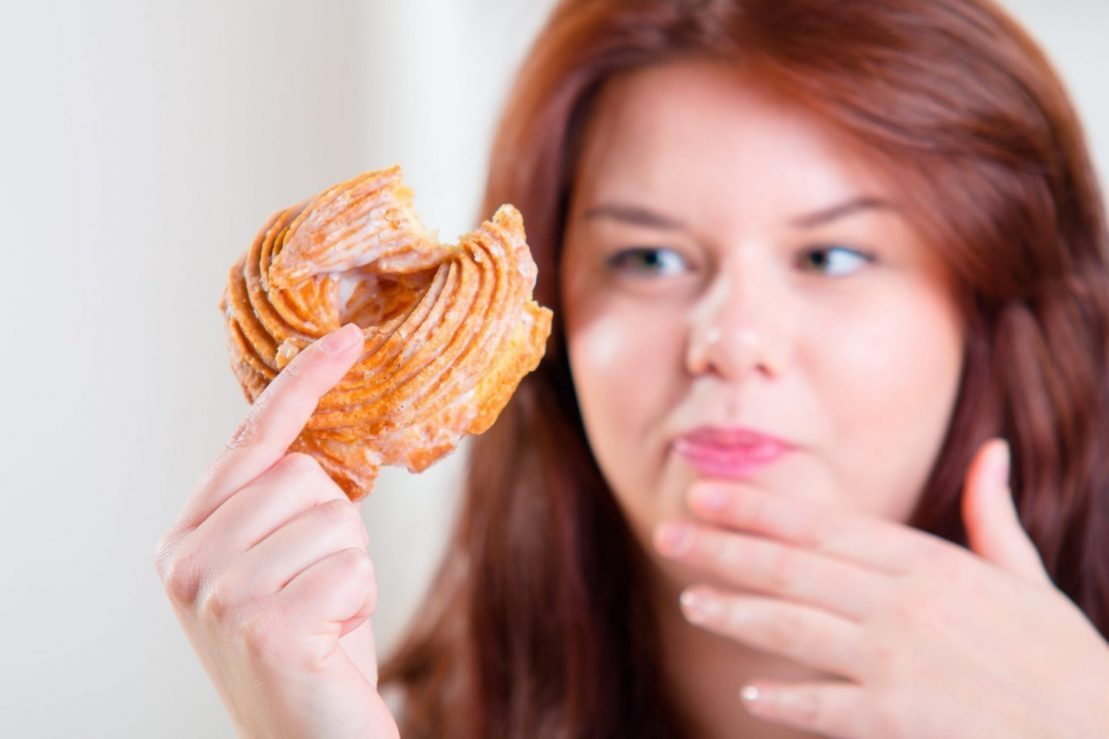 Intuitive eating is not a weight loss diet, nor was it intended to be.

Intuitive eating is characterized by eating based on physiological hunger and satiety cues rather than situational and emotional cues and is associated with psychological well-being. The idea is that you should eat when you’re hungry and stop when you’re full. Though this should be an intuitive process, for many people it’s not. Trusting diet books and so-called experts about what, when, and how to eat can lead you away from trusting your body and its intuition. Anyway, lets address the elephant in the room –

Since the Paleolithic period humans have evolved to cope with controlling eating impulses that proved necessary for their survival during the era, when humans hunted and gathered, and fat, salt, and sugar were in short supply. To ensure that they ate an adequate amount of supplies, they evolved a craving for binge eating. In fact, some of the brain mechanisms involved in pleasurable response to sugar and fat correspond closely to those involved in response to opioid drugs like morphine and codeine.

Humans nowadays live in an environment with a surplus of food and drinks that satisfy these cravings and, in the process, make them overweight, cause illness, and shorten their lifespans. An adult can get by on as little as 500 milligrams (mg) of sodium a day and can certainly live without sugar (and, in fact, without any kind of carbohydrate as long as an adequate amount of fats and proteins are available).

There’s nothing natural about today’s eating habits; with agricultural and food policies and interests, both past and present, determining control over food choices, prices, and even the locations where food gets purchased. But as individuals, we must cope, choose wisely, eat less and resist the enticing temptations.

Many people have reported that adopting diets low in salt, fats, sugar, and animal products alters their eating impulses, and scientific evidence does indeed exist to support this experience. Researchers have also investigated methods to control eating habits towards more health promoting foods. In general, and as expected – the taste palate and food preferences are more flexible when in young age (or, in utero), but even adults can still work on them.

In contrast to popular opinions, ‘flavor’ is not just taste, but a combination of smell, texture, and taste, which is processed by separate sensory nerves and then, quite remarkably, combined into a single stimulus in the brain.

Broadly, five types of tastes have been identified, out of which four are familiar to most people: sweet, salty, sour, and bitter. The fifth is umami, which is triggered by salts of glutamate – the best-known of which is monosodium glutamate – sometimes described as a meaty or savory taste.

In the light of flavor, fat is interesting. Undoubtedly, it supplies texture, giving food viscosity (thickness) and lubricity (slipperiness). But there’s also some indirect evidence that we taste fat through fat receptors that may function like those for sweet, bitter, and the other well-recognized tastes.

Taste perception was a survival skill for hunters and gatherers. All herbivores and omnivores have an inborn liking for sweetness, probably because it’s an indicator of high caloric content in plants. Additionally, there may be an inherent craving for fat (also an abundant source of calories) that promotes binge eating and surplus calorie accumulation until one’s appetite is satisfied.

Although it doesn’t seem likely that flavor preferences can shift at an older age, several studies have shown that people who manage to follow a low-sodium diet for several months wind up preferring lower concentrations of salt in their food.

Several experts on nutrition and behaviour change have developed a number of behavioural techniques for reducing ingestion of unhealthy calories. Brian Wansink, a Cornell University professor and author of “Mindless Eating”, has identified five situations where people are particularly at risk of ingesting large quantities of calories. He has termed them as “meal stuffing,” “snack grazing,” “restaurant indulging,” “party bingeing,” and “desktop or dashboard dining.”

To reduce Meal Stuffing, Wansink suggests using a smaller plate, and serving the meal from the stove, not from the dining table. “Our research shows you eat 22 percent less on a 10-inch than on a 12-inch plate,” he notes. To reduce Snack Grazing, keep the snacks at least six feet away from your desk or from wherever you’re sitting. The distance forces you to think before you grab another bite, and Wansink’s research shows that it can translate into a 125-calorie reduction in your daily energy intake (every little bit helps). The same distancing principle applies to Party Bingeing. You should also put no more than two items on your plate on any trip to the snack table and start with the bulky, low-calorie stuff – like raw vegetables.

Wansink also advises people not to try more than a couple of his techniques in one go. “We find that if people can maintain changes for a couple of months, they will then make a second, or third, or fourth change,” he says.

Altering our palates so we don’t incline towards unhealthy salt and sugar is one way to go. An alternative strategy is to increase our taste for food items are that certifiably health conscious, like vegetables.

Most vegetables have a low-calorie count, an asset in a high-calorie food environment, but also part of the reason why people find them unappetizing. Vegetables also contain bitter compounds – and some people have a genetic propensity to experience more bitterness from vegetables (as well as other foods) than other people do. Heightened bitterness overshadows sweetness. Vegetables tend to be more palatable to people when the bitter and sweet tastes are nicely balanced and form that sophisticated bittersweet experience.

Humans are programmed to seek variety in order to obtain all the nutrients required. Thus, eating a variety of vegetables in a single meal is another way to encourage greater intake. Conversely, this information can be used to reduce consumption of sugar and salt by limiting the number of those calorie-dense food items consumed in a single meal.

DEVELOPING A TASTE FOR WHOLE GRAINS TO LOSE WEIGHT

The genetic variations that affect one’s reaction to bitter-tasting vegetables may also influence the liking of whole grains. According to dietary guidelines, more than half of the grain-based food consumed should be made from whole grain. At least in early stages, one strategy for making whole grains more appealing is to simply mix in some refined grains. In one study, researchers estimated the consumption of buns served at lunchtime in school for children in kindergarten through sixth grade. Over the course of the school year, the proportion of whole-wheat flour included in the buns was gradually increased from nothing to 91 percent without the students’ knowledge. The kids ate similar amounts of the buns until the percentage of whole grain flour reached about 70 percent. After that, the amount of discarded bread increased.

Weight-loss and other kinds of diets have a long history of poor long-term success. One possible explanation – among many – is that completely excluding certain foods, and their flavors, enhances our appetites for them. Once again, moderation is a good idea.

Research has shown that individuals under a dieting regime are more sensitive towards food cues than non-dieters – when they see an enticing food item, their ability to stop thinking about it is less than non-dieters. This holds true even if they’re consuming just as many calories as non-dieters.

To put it another way, an excessive dietary restriction can lead to binge eating. In one experiment, dieting and non-dieting females both were served either nothing, one milkshake, or two. Then they were asked to taste and rate some ice cream. Dieters who felt they’d broken their diets responded by overeating the ice cream, regardless of whether they had consumed one or two milkshakes. The non-dieters did no such thing.

Although the sensory experience of eating probably holds the biggest influence on one’s gustatory desires, prevalent ideas about food can also shape them. When researchers told college students that they were getting an “energy drink” (even though it wasn’t), the students’ pulses rose following ingestion – which did not happen in control subjects.

In this day and age, advertising is a particularly powerful form of suggestion. This is found to be true, especially for children, and isn’t all that bad. Studies have shown that exposure to advertising makes children who are naturally wary of new foods, more receptive towards trying them out.