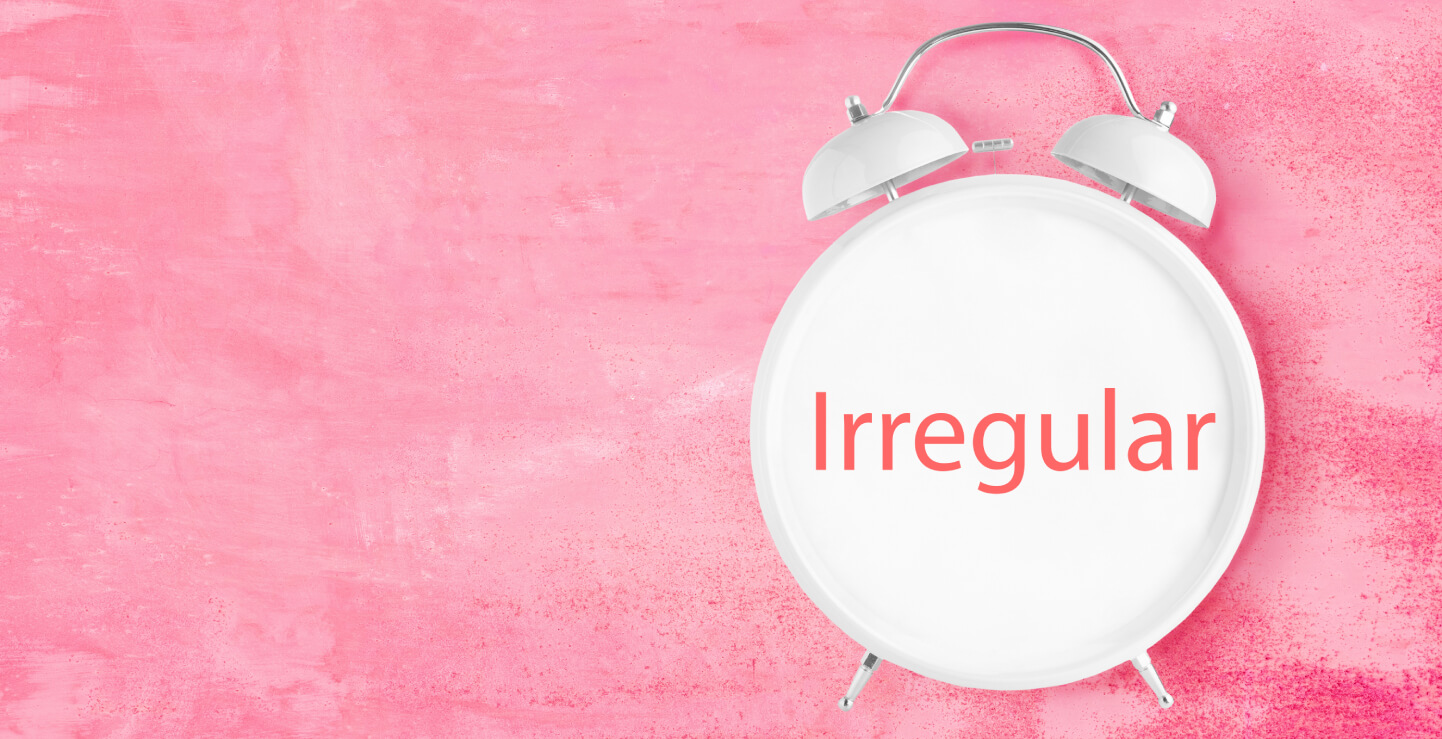 Can Anemia cause Irregular Periods?

Yes, there is a relationship between iron deficiency anemia and irregular periods

Anemia can be stated as a medical condition in which the concentration of haemoglobin or the number of red blood cells within the bloodstream is reported to be lower than normal. The function of haemoglobin is to carry dissolved oxygen, and not having enough haemoglobin or abnormal, insufficient red blood cells, leads to a decrease in the capacity of the blood to carry oxygen into body tissues. This in turn, might result in symptoms such as fatigue, weakness, dizziness and shortness of breath, and many others. There is a varied requirement of haemoglobin concentration as per one’s physiologic needs – varying with age, sex, living altitude, pregnancy status and smoking habits. Some of the most common causes for anemia are nutritional deficiencies, especially iron deficiency, folate deficiency, deficiencies in vitamins B12 and A, inherited/genetic disorders of globin, and infectious diseases like HIV, malaria, septicemia, parasitic infections, tuberculosis and rheumatoid arthritis – which reduce the lifespan of red blood cells.

WHO states that anemia has become a serious global public health problem that particularly affects young children and pregnant women, estimating a staggering figure of 42% of children less than 5 years of age and 40% of pregnant women worldwide to be suffering from anemia.

How Anemia can Lead to Irregular Periods

The loss of blood during menstruation causes considerable decrease in iron content from women’s bodies, in turn increasing the risk of iron deficiencies. Still, it is not at all necessary that this once a month menstruation should always lead to a deficiency. The main reason behind such deficiency is the loss of iron, which is not getting adequately replaced with the amount of iron consumed from their diets. Additionally, iron deficiency is also a commonly observed symptom during pregnancy, due to the high requirement of the nutrients in the body.

In estimation, one in five menstruating women are anemic, which can have adverse effects on menstrual cycle patterns and the reproductive system as a whole. For diagnosing anemia, the following symptoms should be taken into consideration:

It proves crucial to provide your body with iron-rich foods throughout the month, especially during the 3-5 days of menstruation, in order to replenish the lost bodily nutrients:

Why Taking Proper Care of Health is Important to Prevent Irregular Periods ?

Irregular periods may be a link to past medical health, certain medications, lifestyle, and current medical conditions can all affect the menstrual cycle – which is counted from the first day of one period to the first day of the next, isn’t the same for every woman. Most women have a period every 21 to 35 days that lasts about two to seven days. Your cycle may be regular – occurring at the same interval and lasting about the same length of time every month – or somewhat irregular, and your period may be heavy or light, painful or pain-free, long or short, and still be considered normal.

The first thing to consider is pregnancy, because, even in the case of irregular periods, there is still a chance of ongoing ovulation. Once pregnancy is ruled out, it is imperative to review health history with a doctor. In the event that irregular periods have been experienced in the past, this pattern might just be normal. But if periods have been regular but there is a history of ovarian problems, such as ovarian cysts, might warrant a closer look. Hormone-producing cysts can cause irregular periods. Also, communicating with the doctor about any ongoing medications, would be beneficial. Certain antidepressant drugs and anti-anxiety medications, for example, can affect menstruation.

Lifestyle and environmental factors can have an impact on periods as well. In some cases, high levels of stress may disrupt the menstrual cycle. Excessive exercise could cause periods to stop for a while, and extreme weight loss and eating disorders can affect the cycles, as well.

If medical history does not offer any clue, the next step would be for the doctor to check for an underlying medical condition. Some thyroid disorders may lead to irregular periods, and high levels of the hormone prolactin could also be the source of the problem. In some cases, prolactinoma – a noncancerous tumor of the pituitary gland in the brain – may result in the overproduction of prolactin. A variety of other disorders could also cause irregular periods, including anemia, polycystic ovary syndrome, endometriosis, pelvic inflammatory disease and uterine fibroids.

It is crucial to mention that tests show you aren’t going through menopause. Because a woman’s hormone levels can fluctuate considerably, the diagnosis of menopause usually isn’t determined through a blood test or any other diagnostic study. A variety of factors should be considered when interpreting these tests, including your age, menstrual history, and what symptoms or body changes you’re experiencing.

If a medical evaluation uncovers no problems, your doctor may suggest you take the hormone progesterone to trigger a period. If there’s no response, you could be in perimenopause or there could be a problem with your ovaries, resulting in estrogen deficiency. Both conditions need attention because early menopause and low levels of estrogen can affect your long-term health, particularly your bone health. If, however, your body responds to the progesterone, and you have your period, you do not have a deficiency of estrogen. In that case, there’s probably no cause for concern.

To determine why you’re not having periods, see your doctor to have your condition evaluated.